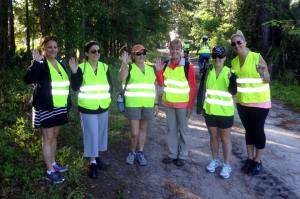 Soft breezes with a cool and sunny morning promising to top-off in the low 70’s was the forecast when an alarm woke me at 5 am. on my “day off”.  My two dogs, Willey and Tilley, knew about the day’s agenda from the former night’s preparations:  a day-pack carefully equipped, coffee pot set to brew, and my hiking attire laid across a chair for quick dressing.   However hopeful the look in their eyes, on this day they couldn’t go with me, because their breed had been excluded from the invitation to traverse a new “primitive” section of trail not yet open to the public. It was with much sadness I closed the door, promising them a long walk when I returned later in the day.  As all good dogs will, they accepted the fact, watched soulfully from the front window, and settled down inside the air conditioned house, dreaming doggie dreams about chasing squirrels and fording streams on previous adventures.

During the hour drive to the bus that would transport our group to a trailhead, I considered a past involvement with a growing trail group in Kentucky. Honestly, my expectations for the coming day were limited:  it would be a leisurely walk along a sandy path among new friends, ending too soon and requiring too little effort. And yet, it was a much needed new beginning on a beautiful day for which I was thankful. As one who had sampled the visual splendor of Redbud and Dogwood trees in spring bloom, and smelled the upsurge of sap and heard the gurgle of streams in Appalachian foothills, I could only hope this abbreviated outing would meet a growing hunger for another wilderness adventure, rising  from within the heart of a metropolitan, work- weary soul.

Florida is flat, and there seems to be no getting around the fact.  To some it wouldn’t matter, but for a hiker and trail rider transplanted from a varied landscape of breath-taking hills and forests with wildflowers too numerous to mention —Kentucky and the northeastern corridor along the Appalachian Mountain Range—and memories of the exhilaration of pushing up hillsides to view distant vistas, amplified by perceptible seasons, I was reluctantly giving a terrain without elevation-changes or appreciable temperature fluctuations  a chance to impress.  It was a concession I was willing to make for even the chance it might soothe a deep-seeded yearning to “taste and see” God’s creation is good.

Arriving at the shuttle point, a peaceful 12 acre farm, memorialized for an African American couple who worked on civil rights issues and died on Christmas Day 1951, also their 25th wedding anniversary, when a bomb exploded under their bedroom, it was hard to imagine the grounds could ever have been a place of unrest.  Yet here we were, more than six decades later, launching from a place that had been reclaimed and re-purposed, much like the Rails to Trails project we were about to experience.  It was the beginning of a lesson in restoration, based on vision and concerted effort.  The 45 minute drive from Mims to a location north of Titusville gave us all a chance to observe a region in the process of rebuilding, after years of economic collapse following the de-funding of a former space program that had resulted in the loss of jobs, homes, and once thriving communities.  It was the hope that projects like the one we were about to sample would help revitalize the local economy by extending Outdoor Adventure Tourism opportunities—-a familiar concept in other parts of the nation where industries and priorities have been shifting.

This day was a relatively simple walk or bike ride on a short 7 mile trail in the eastern part of the state where a small part of a greater vision is being realized.  Over 70 people participated in the initial “ground-breaking” of this Rails-to-Trails project, now  designated  the Space Coast Connector.   In tandem with privatized space exploration projects, an added port at Cape Canaveral for Cruise ships, and Florida’s ongoing reputation as a “vacation destination”, the completion of the longer 325 mile contiguous trail from the Atlantic to the Gulf coast on the western side of the state is projected to spur economic recovery within the state of Florida.  Already 75% complete, the state-funded project is dependent on individual counties and local governing bodies and volunteer groups to meet the 5 year goal for the Coast to Coast Trail’s completion.  Even more impressive and commendable is the attention and detail being given to conserve natural habitats and protect wildlife along the way.

Fresh from the start on an unusually cool morning, I joined six of my co-workers from the Marriott Courtyard in Cocoa Beach who’d set aside part of a day off.  It was a time for casual conversation, and a welcomed opportunity to learn more about those I’ve worked alongside for the past 6 months:  one whose land of origin is half way around the world, another whose daughter has a play opening Off-Broadway in New York city at the end of the month, and yet another who is a young mother sure to pass on a love of the out-of-doors to her infant daughter.  Not least of all was a proud wife whose husband had joined us. His story was one of partial disability to mobility, shaving pounds off his frame and gaining over-all health and stamina by simply walking (now up to 12 miles per day), drinking more water and limiting soda consumption. Improved health one result of outdoor recreation.

Dropping back to walk at a more leisurely pace along the flat, sandy trail, I had a chance to converse with others who want to preserve, protect, and promote these natural resources for all to enjoy.  A veteran of the cause, Elaine Moody, whose husband , Norman Moody, writes articles for Florida Today to keep public awareness up, spoke of how she enjoyed walking at a leisurely pace to take pictures while he bikes at a quicker pace, and how their shared vision has enriched both of their lives.  She spoke of how her grandchildren were being introduced to ecological concerns by the simple act of planting native flowers and watching them attract native wildlife in their own backyard.  She was in no hurry to prove her pace or get to a “finish line. At the expense of others in my group, waiting patiently at the “end point” to take a group picture, I had no regrets about slowing my pace to talk with a woman who knew the value of this day’s introductions.  Cat-tails, swamp hyacinth, Spanish Moss draping from live Oaks and the splaying hands of Palmetto Palm trees, clusters of fern, pallets of rootless, floating water plants swirled into motion by fish swimming beneath the surface of  marsh waters— these were the wonders of a Florida trail I would have missed if I had been power walking at the front of the pack.

Hand drawn “assurance markers” dotted the trail as we advanced into the warmer part of the day, along with coolers stocked with cold bottled-water.  In an effort to pick up cans and plastic bottles abandoned by previous trekkers with less regard for the “Leave No Trace” mantra of serious trail advocates, I had discovered fire ants emerging from sand choking the vacated interiors of what I thought of as “recyclables” in need of salvaging.  The sting remains, but it served as a reminder that ever region has its insect pests.  A golden with black-striped snake slithered off into brush at the berm as we paused to look at the assorted vegetation filtering swamp-water along embankments to each side of the trail.  (Later I learned it was a non-venomous, adult Eastern Yellow Rattlesnake.) Then a blue dragon-fly with transparent wings flew across our path and lighted on a nearby bramble bush full of ripe blackberries.   We came across fine-grained patches of “sugar sand” that slows walkers and requires cyclists to dismount their bikes to push through.  And then there was a trail monitor, Steve, who appeared along a short patch of shade, maneuvering a 4-wheeling Gator to offer safe passage over a deeper “pond” where unknown Floridian type wild-life might take advantage of rolled up pant-legs and bared feet at the second water crossing.

Heavenly graces sometimes deposit us onto pathways where we learn there are others, like-minded, who value the land they inhabit.  Even on the flat-lands of Florida, there was a lesson inherent in the day:  How connecting, connectors, and connections matter—geographically, socially, and as a matter of personal discovery.  Whether in the canyons of the southwest, the majestic mountains of the Pacific northwest, the rolling hills of the mid-west, the varied and challenging terrain of the Appalachian Mountains, or in the very flat “primitive” pathways of Florida, we are part of a greater nation, rich in natural resources, in need of preservation and appreciation by those who dare to venture out and act on their behalf.   In so doing, we regain a sense of balance and sanity, and become “noteworthy” for reasons beyond economic gain.  We as Americans— especially those confined to buildings or tied to vehicles that take us about in numbing streams of traffic— need to be reminded of and experience first-hand the trans formative power of Outdoor Adventures in the company of our neighbors, connecting with new people who become friends.  Because, in the end,  it’s not just about a trail to hike or bike or horseback ride;  it’s about finding our historical roots, hearing stories of people met along the way, and the development of healthy relationships to promote concerted efforts for needed change.…..for the longer trail ahead. 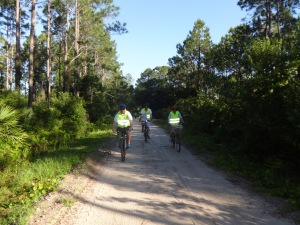 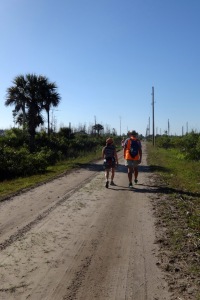 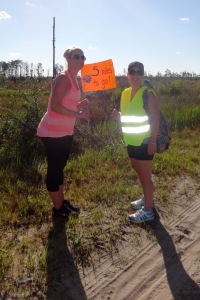 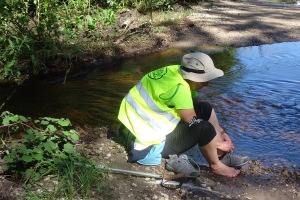 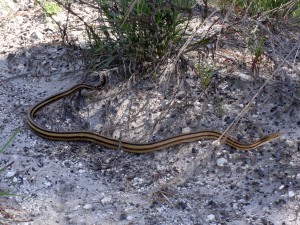 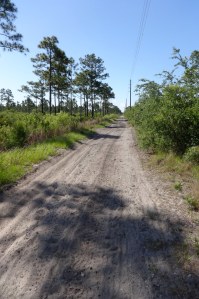 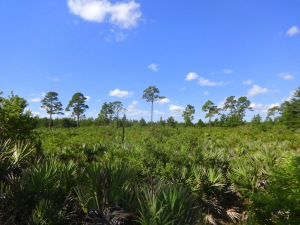 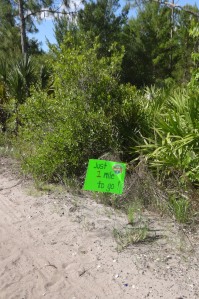 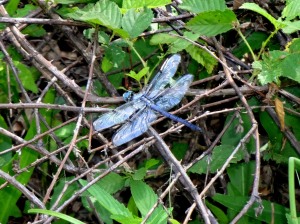 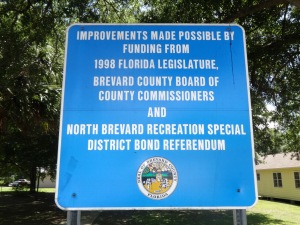 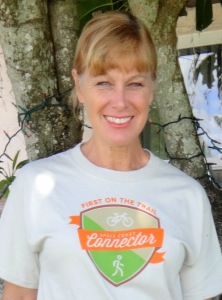 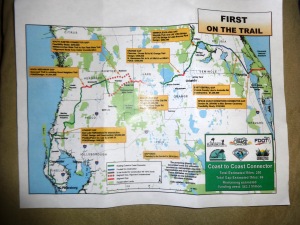 2 thoughts on “Connecting on a Connector Trail”