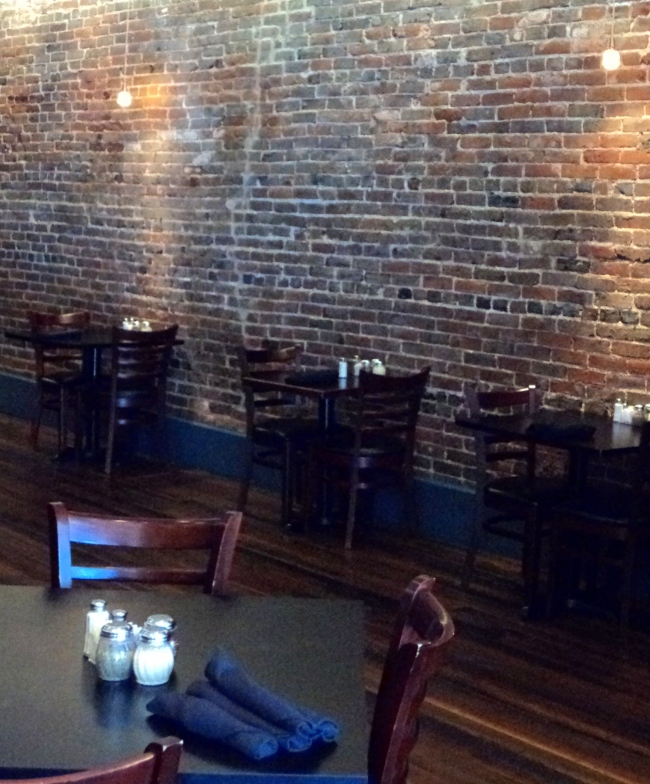 An impromptu lunch in historic Paris, KY after a couple days of traveling between home and  the VA Hospital in Lexington, became yet another reminder how keeping up with life-long friends can enrich our later years in life.  Only a week before, we’d had lunch at the “Grey Goose”, located in a now renovated space, once known for the two competing drug stores occupying the brick building on Main Street. Our table companions that afternoon had been a retired pastor and his wife, with whom we’d walked familiar streets and heard stories about the memories of past events and people who’d once lived in the area.

On this day, attempting to regain some semblance of normality, after coming face to face with life and death issues over the past 48 hours, we entered the high ceiling and bare-brick-wall side of the eatery.  An open booth near a large window with light-filtering Roman shades gave us a peripheral view of the busy late-lunch crowd. After making our menu selections, it was hard not to notice a group of elderly women, dressed to the “nines”, sitting at a long table nearby.  They were jovial and conversant, as one woman at the end nearest us sat more reservedly in her wheelchair, until pieces of pie where brought out and her demeanor brightened.  One of them suggested singing to the lady at the head of the table, but none came forward to start the familiar chorus of “Happy Birthday”.

I thought, but did not act, as my companion looked at me across the table and quietly said: “We need to sing for her.”  As a guest in this town with no particular connection to the other patrons, I saw there was an opportunity and understood my lunch partner’s boldness.  He’d just come out of a hospital where he’d spent the last two days, knowing he’d “dodged a bullet”, and he wasn’t willing to hold anything back.  Living and seizing opportunity was an agenda fresh in his mind.  I admired his boldness, but let him get in a “no guts, no glory” look before he pushed back his chair and headed for the unsuspecting elders.

Just as casually as his father, who’d ministered to the community decades ago, he introduced himself and proclaimed, “If no one else will sing to you, I will.”  Without hesitation, he asked the lady’s name and age, betting on the truth that past a certain age, bragging rights is what matters.  And of course, all the ladies joined in with his baritone voice leading and charming smile reassuring them they were all important to this event and day.  I admired the way he put them all at ease, and quickly made connections between a town he once knew as a young pastor’s son, and the very women who were sitting at the table, at that very moment.   Saved embarrassment by introduction, I soon found myself a part of an inner-circle of friends who’d been meeting regularly since they were school children.  All in their 80’s and 90’s now, among them were Presbyterians, Methodists, Christian Church members, and some with no particular church affiliation at all.  And yet they were coming together, as they always had, since child-hood, sharing stories and life events.  The self-professed “youngest senior” told me they’d been at the country club just the day before playing Bridge, but they felt like trying out a new place in town for this day’s outing.  The décor had changed, but it was still a familiar place to them, among old friends.

As we excused ourselves from their celebration of another year of life, I could only be thankful for the reminder that true friends are for life.   And, you never know when an impromptu gesture of caring might just give others a story of their own, worth passing on.